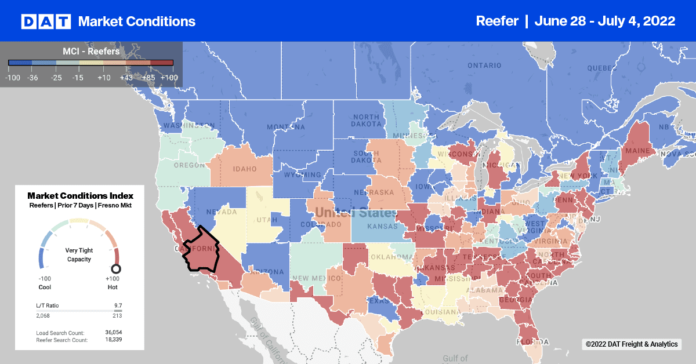 Summer celebrations and berries go hand and hand, from patriotic-themed desserts highlighting strawberries and blueberries to summer traditions of picking berries from local farmers. They play a key role in summer festivities. According to a recent article, this season’s harvest will be strong despite headwinds from weather to increased costs.

Naturipe Farms based in Salinas, CA, had one of its most challenging spring weather patterns in years, said Kasey Kelley, senior director of business development. “In the Southeast, we had several freeze events reduce the blueberry crop. California also had some freeze events, with fluctuating temperatures during the spring that affected both the strawberries and the blueberries.”

“We are facing many cost challenges this year, as most materials and inputs have seen about a 25% increase in costs across the board,” he said. “Supply chain challenges have also affected how we source packaging materials, so there is less room for error in planning.”

According to USDA data, strawberries, blueberries, raspberries, and blackberries YTD volumes are up 12% y/y and tracking at the highest volume over the last five years. Imports from Mexico have carried most of the volume for blackberries, blueberries, and raspberries this year and are up 19% y/y. California (up 6% y/y) and the Southeast (up 14% y/y) regions have had a strong strawberry season. As we move into July, strawberry volumes should remain strong out of California, and blueberry volumes will start to increase out of the Pacific Northwest and Northeast regions. All rates cited below exclude fuel surcharges unless otherwise noted.

In the lead-up to last weekend’s Independence Day celebrations, reefer capacity tightened in California following last week’s $0.07/mile increase to an outbound average of $2.58/mile. Of all the major California freight markets, capacity was the tightest in Stockton, where reefer spot rates spiked, increasing by $0.18/mile to $2.75/mile. Loads from San Francisco to Seattle returned to the same level as the previous year at $4.21/mile, while loads from Fresno to Seattle increased to $3.90/mile or $0.47/mile lower than the last year. Lower outbound produce volumes in Fresno dragged down linehaul rates to $2.22/mile for loads to Hunts Point, NY, which are $1.21/mile lower than the previous year.

In Savannah, GA, reefer outbound average spot rates increased for the fourth week to $2.76/mile following last week’s $0.13/mile increase. That’s also up $0.54/mile in the previous month. Capacity from Savannah to Orlando tightened in the lead-up to July 4, with spot rates averaging $4.45/mile last week, up $0.74/mile over the May average but still $0.18/mile lower than the previous year. On one of the busiest reefer lanes, loads from Atlanta to Orlando were flat last week at $3.30/mile or almost $0.70/mile lower y/y. In the Pacific Northwest, regional reefer spot rates increased by $0.10/mile last week to $1.79/mile. In contrast, on the high volume lane from Portland to Green Bay, linehaul rates continue to cool, averaging $1.46/mile last week or just over $1.00/mile lower than this time in 2021. The current volume of long-haul produce, as reported by the USDA, is around 17% lower than this time last year and the lowest since 2017. That’s the equivalent of just over 300,000 fewer monthly truckloads of fruit and vegetables for June compared to the previous year. Load posts increased last week by just 3%, while equipment posts decreased by 6%. As a result, the reefer load-to-truck (LTR) ratio increased slightly to 8.37. According to USDA data, weekly truckload volumes of produce originating in California are on track to be at their lowest level recorded in the last 20 years. As of last week, June’s truckload produce volume in the Golden State was 29%, or just over 58,000 lower than the average of June volumes going back to 2000. This has substantially impacted reefer rates this produce season following last week’s $0.03/mile increase in the national average reefer spot rate. In non-pandemic years, reefer linehaul rates typically increase by $0.18/mile during June; this year, they’ve dropped by $0.07/mile month-to-date. At $2.32/mile, reefer spot rates are currently $0.55/mile lower than the previous year but $0.21/mile higher than the pre-pandemic average for this time of the year.

I Can Still Make Cheyenne

Is it time to bring back Ethical Oil? @Ezra Levant