Trucker Blockade
Home News When Will Government Unions Stand Up For All California Workers? 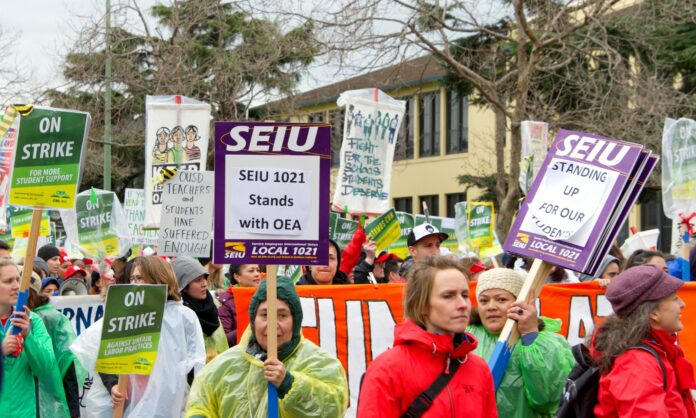 Public sector unions have corrupted the ability of California’s governing institutions to serve the interests of the people. The consequences include a failing public education system, catastrophically flawed environmental policies, and an unrelenting attack on the ability of small businesses to survive. In each of these cases, there are plentiful examples of this corruption, and the damage it has caused. Here are just a few:

California’s teachers unions have supported work rules that render it nearly impossible to fire incompetent teachers, or, when layoffs are necessary, to retain the best teachers instead of those teachers with seniority.

They have supported curricula that promotes divisive political ideology instead of teaching basic skills.

In higher education, they have supported the imposition of a “Diversity, Equity and Inclusion” bureaucracy, at staggering expense, that one may argue serves no purpose other than to cater to mediocre students who prefer to allege discrimination instead of actually doing the hard work that scholarship requires.

They have supported, overall, a bloated expansion of the administrative bureaucracy at all levels of public education, which is one of the primary reasons there is never enough money in public sector budgets to go around.

The have opposed school choice, preventing the emergence of significant competition to failing public schools.

The teachers union has damaged public education in California, compromising the futures of millions of students.

While the firefighters union has lobbied successfully for pay and benefits that are arguably higher than might be necessary to effectively recruit and train qualified firefighters, they have not damaged the profession of firefighting. On the contrary, California has never been better served by its firefighters than it is today. But as the State of California built what has become the most effective wildfire suppression army in the history of the world, it failed to change environmentalist policies that are to blame for the catastrophic fires over the past few years.

Not trying harder to fix this may be a sin of omission rather than one of commission, but it’s a big one. This powerful union represents men and women who dedicate their lives to protecting people, property, and ecosystems. They have a moral obligation to recognize that building up the resources to fight fires must be balanced with taking effective steps to prevent fires in the first place.

The reason for California’s devastating wildfires is because while we got better and better at suppressing the naturally occurring fires that are essential to thin the forests, environmentalist inspired restrictions reduced California’s timber industry to a quarter of its former size. Up until the 1990s, California’s annual timber harvest was over 6.0 billion board feet. Last year, it was barely 1.3 billion board feet. If you don’t let forests burn naturally, and you don’t harvest timber, you get stressed and overcrowded trees that become tinder for devastating superfires that have no historical precedent.

The firefighter’s union can and should use their influence to bring back commercial logging. There is no other way to cost-effectively restore health to California’s forests.

Perhaps the saddest example of union power in California harming the general public is the passage of AB 5, a union backed law that redefined millions of independent contractors as employees, and required their clients to hire them or face prosecution. This flawed, grossly intrusive law is taking effect in stages, with the latest target being the 70,000 independent truckers that help move goods from California’s ports to points all over North America.

The language of AB 5 requires truckers that want to continue to do business as independent owner-operators to fulfill the following criteria:

“The person is free from the control and direction of the hiring entity, both in contract and in fact.

The person performs work that is outside the usual course of the hiring entity’s business.

The person is customarily engaged in an independently established trade, occupation, or business of the same nature as the work performed.”

This puts truckers in a no-win situation. Of course shippers will direct what they want truckers to pick up and deliver, and of course that is something done in the course of a shipper’s business. But why should an independent trucker be forced to become an employee of one of their clients? Wouldn’t that mean the trucker could no longer do work for other shippers. Wouldn’t that remove flexibility from the shipping industry and truckers to meet fluctuating demands?

Kevin Kiley, currently running for U.S. Congress, and one of the few members of the California legislature not cowed by public sector unions, had this to say about AB 5:

“AB 5 is one of the most corrupt laws in U.S. history. It has already cost countless Californians their livelihoods. Now it is placing further strain on supply chains, leading to even greater inflation and greater hardships for California families.”

Government unions in California have the power to make changes that help everyone, instead of just their members. For starters, they can stop marching in solidarity with the teachers union, which is incorrigible. Then they can find common ground on at least some issues with conservatives, while agreeing to disagree on others. They might take on the environmentalists, by supporting spending on new water supply infrastructure and by helping to restore California’s timber industry.

And when it comes to laws like AB 5 and the like, they might merely ask themselves – is this going to help the overall economy, or not? After all, a rising tide lifts all boats.

If Enough People Did This, Would Gasoline Prices Come Down?