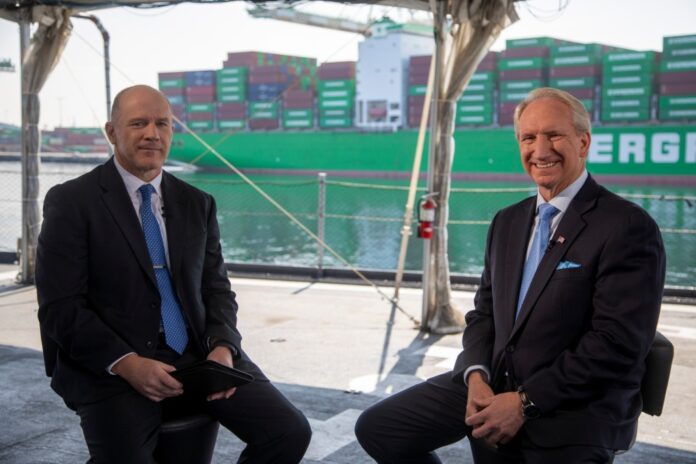 Against the backdrop of a morning demonstration that jammed terminal roadways with truckers protesting the state’s AB5 law, Port of Los Angeles Executive Director Gene Seroka on Wednesday, July 13, reported that cargo numbers again surged in June, setting yet another monthly record in the port’s 115-year history.

A new June cargo record saw 876,611 twenty-foot equivalent units (TEUs, the industry’s standard cargo measurement) move through the port. Some cargo dwell times once again are also growing, however, but this time primarily linked to slowdowns and delays at the nation’s rail hubs where there are added complications of an ongoing labor dispute in that industry.

It all could, Seroka said, lead to a “nationwide logjam” as he stressed the urgency of getting faster pickups and dispatching at inland rail terminals.

Port rail cargo waiting to be loaded onto on-dock rail — slowed by a shortage of engines and cars available to service the western U.S. —  is now sitting much too long, Seroka said. Some 20,000 pieces of cargo now have been sitting at the port for rail loading for more than nine days. In normal times, he said, that would amount to two days.

While the port’s dwell-time fines are still in place, using that option is complicated with cargo delays that are specifically linked to the separate rail issues, port officials said.

And overall, Seroka said, cargo gridlock is down substantially from last year, though terminals are still not operating at “maximum capacity.”

“In comparison to the last quarter of last year, we have no where near the inundation,” Seroka said.

Lyons, former commander of the U.S. Transportation Command, took over as the Biden Administration’s port and supply chain envoy following an announcement on May 27. He took over from former Port Envoy John D. Porcari.

Speaking about the supply chain complications, Lyons pointed to “the enormity of the global disruption caused by COVID-19.”

And the recovery within the rail industry, he added, “is going to be unique and be a little slower than other (industries).”

Added to that sector’s challenges is that much of the labor it lost during the pandemic did not return.

“What each (of the railroads) would say is that they acknowledge their service level isn’t where they’d like it to be, but it doesn’t mean they’re not working hard to get it there,” Lyons said.

The bottom line when it comes to improving the nation’s supply chain performance, Lyons said, is “cargo in motion should remain in motion until it gets to its destination.”

“The truckers are so critical to this supply chain and we’ve got to make sure there are conditions that will take care of them,” he said. “We’ll continue to watch and assess those impacts.”

Seroka, calling truckers “the first- and last-mile ambassadors” of the supply chain, said “they’ve got to be treated with respect.”

Asked about the upcoming annual peak season — when fall and holiday goods begin to flood the ports — Seroka said this year’s season is already kicking off and could be longer than usual.

“We are facing a lot of headwinds with another inflation number this morning that was a disappointment,” he said, but he added that consumers are still purchasing goods.

Cargo coming in over the next several months will include the traditional back-to-school, fall fashion and holiday goods, Seroka said, with this year’s season expected to run into mid-November or even up to Thanksgiving before the flow tapers off.

Addressing the ongoing contract talks between the International Longshore and Warehouse Union and the Pacific Maritime Association, Lyons said the Biden Administration “is watching as closely as they can be watched without being a point of interference.”

Negotiations, Lyons added, are at an expected point, despite having gone beyond the July 1 deadline for a new contract.

Promises “loud and clear” from both sides, Lyons said, have been made for no work slowdowns as the process grinds on.

Also being watched, however, are the labor negotiations in the rail industry, already ongoing more than two years and counting, in which a strike still could be a possibility. Announcements are expected on July 17 related to that issue.

The port’s June numbers edged out those from June 2021, becoming the port’s busiest month of June in its history and bringing the port’s total annual cargo handling numbers to more than 5.4 million TEUs at the mid-point of 2022, matching last year’s record pace.

“Despite inflation and higher-than-usual inventory,” he said, “we expect cargo volume to remain robust the second half of the year.”

Sign up for The Localist, our daily email newsletter with handpicked stories relevant to where you live. Subscribe here.

GET READY. THEY JUST EXECTUED THE NEXT PHASE THEIR PLAN. If You...

Teen who crashed into semi trailer was watching ‘Stranger Things’ on her phone, Minnesota...