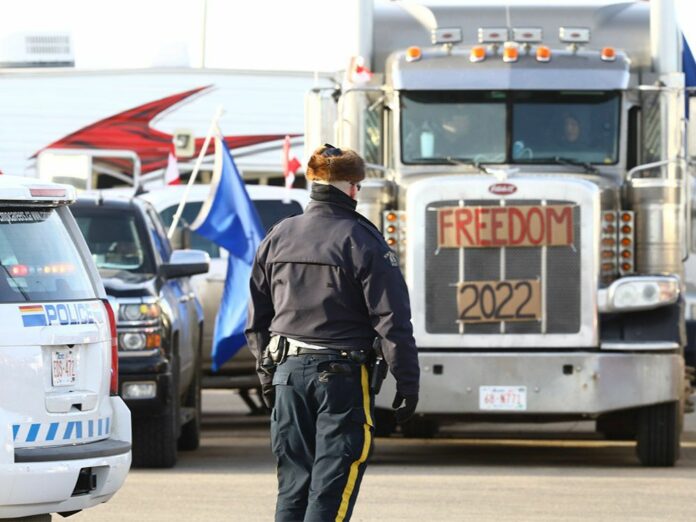 LETHBRIDGE, Alta. — A trial before a judge and jury has been scheduled for next year for four men charged with conspiracy to commit murder at a border blockade in southern Alberta.

Chris Carbert, Chris Lysak, Anthony Olienick and Jerry Morin were charged in February after RCMP found a cache of guns, body armour and ammunition in trailers at the protest near Coutts, Alta.

Lysak, who is 48, is also charged with uttering threats, possession of a weapon and mischief to property over $5,000.

In Court of Queen’s Bench in Lethbridge, Alta., on Monday, Justice Charlene Anderson ordered the four men, who are being tried together, to stand trial for three weeks, from June 12 to 30.

The Crown elected to proceed with a direct indictment, which eliminates the need for a preliminary hearing before trial.

Lysak’s lawyer, Jim Lutz, had been urging the court to set the trial date as quickly as possible. Lysak, Olienick and Morin have already been denied bail and will have been in custody for 16 months before the 2023 trial begins.

A judge is expected to render a bail decision for Carbert next week.

Court has heard there is a large amount of information on the case, including wiretap audio and summaries.

The blockade paralyzed the busy United States border crossing at Coutts for more than two weeks in late January as part of protests against COVID-19 vaccine mandates for trucker drivers and broader pandemic health restrictions.

A total of 14 people were arrested following an RCMP raid in February.

Two tactical vests seized by the RCMP had badges on them, which the Canadian Anti-Hate Network said have links to troubling movements.

One vest had a “Diagolon” patch on it, a white diagonal line across a black rectangle, that is linked to an often conspiratorial and antisemitic group.

Police allege the group was willing to use force if the blockade was disrupted and described the threat as “very serious.”

This report by The Canadian Press was first published July 11, 2022.

If Enough People Did This, Would Gasoline Prices Come Down?

Warning Truck Drivers! Do Not Stop At This Pilot Truck Stop Today! Your Health...

How The Trucker Convoy Held Canada’s Economy Hostage | The Breakdown