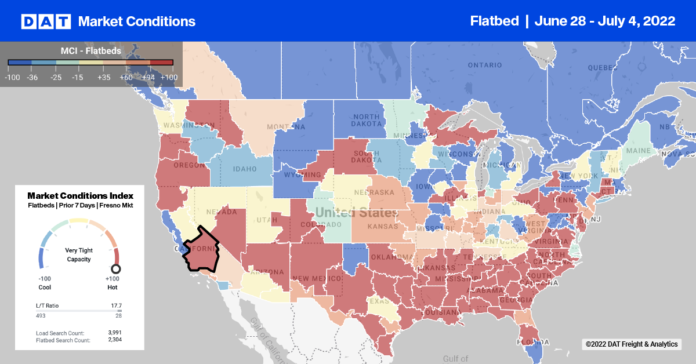 Flatbed demand out of Kentucky may see a decline in the next few months as an aluminum producer announces plans to shut down their Hawesville, KY plant. Century Aluminum announced that it plans to shut the smelter, which it calls “our largest U.S. smelter and the largest producer of high purity primary aluminum in North America,” for nine to 12 months starting the week of Aug. 5.

According to Jesse Gary, president and CEO of Century Aluminum, power costs have more than tripled the historical average in a very short period. However, he remains confident that the smelter could reopen once prices stabilize. On April 28, Century reported that its shipments were up 5%, and net sales were up 14%. According to the U.S. Bureau of Labor Statistics, the PPI for aluminum reached an all-time high in April at 195.77; however, aluminum’s commodity price, which peaked in March, has been on a decline and is down 35% since the peak.

According to the Aluminum Association, the transportation sector is the largest North American market for aluminum, accounting for 10.0 billion pounds or 35.5 percent of total shipments. Aluminum is also the fastest growing material in the automotive market today, expected to grow around 12% on a per-vehicle basis by 2026. Based on Aluminum Association surveys, the estimated annual U.S. primary aluminum production rate totaled 1,000.2 thousand metric tons (kmt) during March 2022, an increase of 12.9 percent over the March 2021 annual rate of 885.9 kmt.

All rates cited below exclude fuel surcharges unless otherwise noted.

Flatbed capacity was tight in Medford, OR, following last week’s $0.45/mile increase in spot rates to $3.57/mile for outbound loads. On the 700-mile haul to Los Angeles, linehaul rates averaged $2.81/mile, which is $0.50/mile since May and almost the same as last year. Capacity eased on the Medford to Phoenix lane as rates dropped to $3.08/mile but still $0.36/mile higher y/y. While Tallahassee, FL, is not a significant freight market, ranking at number 73 out of 135 flatbed markets, capacity was very tight last week. Load posts jumped by 38% w/w, pushing up outbound linehaul rates by $0.30/mile to an average of $3.32/mile.

On the short-haul lane from Tallahassee to Lakeland, spot rates were flat last week at $3.51/mile, which is $0.20/mile higher than the previous year. In Lakeland, ranked number 35 in flatbed load posts, spot rates increased by a penny-per-mile to an average of $2.08/mile last week even though load post s dropped by 4% w/w.

Flatbed capacity tightened in Los Angeles last week even though load posts dropped by 17% w/w. Linehaul rates in Los Angeles jumped by $0.22/mile last week to an average of $2.62/mile, while the opposite was confirmed on the high-volume northeast to Salt Lake City. At $2.95/mile, spot rates on this lane are almost $1.00/mile lower than the previous year, with a similar trend on the 1,000-mile haul to Denver, where rates averaged just over $3.00/mile last week. Load east to Phoenix was higher last week at $4.08/mile and remained very close to the long-term average on this lane.

Flatbed load posts plunged last week, decreasing by 18% w/w but remaining just over 5% above 2018 levels when the flatbed market was hot. Flatbed equipment posts stay at their highest level in six years following last week’s 1% w/w decrease. As a result, the flatbed load-to-truck (LTR) ratio dropped by 17% w/w to 28.05 is closes to 2020 levels.

Farmers Protest In The Netherlands !

Stealing All Of A Truck Drivers Equipment While He Sleeps At Loves Truck Stop...